And it is a principle of nature that truth will always reveal itself no matter how long it takes. However, it does take long sometimes and it might be too late before it does. Besides the fact that truth is important, nobody likes to be taken for a ride or as a fool. 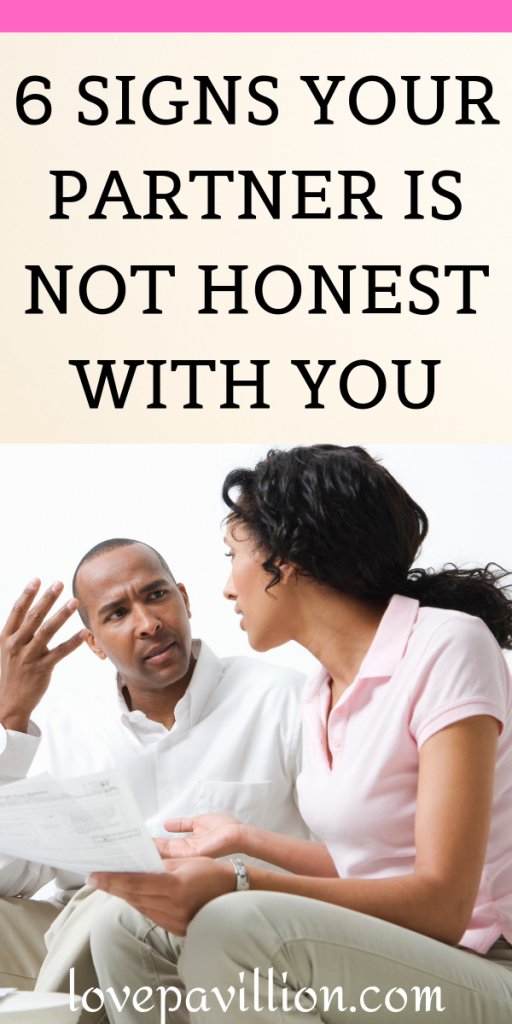 There are signs that show your partner is not honest with you, you should be conversant with them, so you can deal with it as early as possible.

Signs that Your Partner is Not Honest with You

The first sign of a liar is that they are inconsistent. Now, there are certain liars that are professionals and can keep a consistent trail of lies but it is very rare, especially if you are very observant. Truth is stronger than lies and so, it is practically impossible for the stories of a liar to always add up.

Sometimes, what they told you last week will be different from what they say today or what they mentioned earlier in the story doesn’t seem to match up with what is said now. Watch out for inconsistency, it is the best way to find out if your partner is lying.

This is true for some liars but not for all. Most liars usually fidget, become uneasy or uncomfortable when speaking. Due to the fact that they are afraid of being caught, they will be greatly nervous.

So while their words might make sense, their body language might be sending signals of distress and uncertainty.

Most people avoid eye contact when they are lying because we usually cannot keep a straight face when we are lying.

People who are lying usually evade questions; they are either trying to change the topic or they are being vague and not giving straight answers.

When having a conversation with your partner is not easy and you have to struggle to get them to speak – especially if that is not their usual practice – then you might want to check for lies.

A new behaviour or new schedule or plans that don’t make sense or add up might be a sign of lies. If your partner is acting differently and having a different schedule from what is the usual, especially when there is no logical explanation for it, then it is important to watch out.

Accuse you of lying

Most times, people project their feelings on others. Many people who are usually suspicious of people being a certain way are guilty of those same things and so they believe everybody does the same.

If your partner is constantly accusing you of lying without reason, then the person might be dishonest.

Sometimes, your guts and instinct call your attention to lies. Instinct, they say, never lie. I personally wouldn’t go that far because I believe there are few things that are that absolute in life.

However, I would say, if your instinct tells you your partner is lying, investigate why you feel that way without accusing them, just so you do not accuse them wrongly.

I would say, in conclusion, that you should always confirm what you feel before you accuse your partner of lying. Trust is important but it is also important to watch out for yourself. Trust your instinct but test it first.

How To Know You Are Dating A Narcissist

12 Signs You are Dating a Loser

Relationship Deal Breakers You Should Watch Out For

Mistakes You Shouldn’t Make at the Beginning of a Relationship