Have you ever wondered, “does he miss me?”

It goes two ways; he may miss you, and he may not miss you.

This piece is all about pointing you in the right direction to know if he does or doesn’t miss you.

Do you know of any man who can go any length to suppress their attraction and feelings for a particular woman without even giving it a try?

The “does he miss me?” question has a lot of glaring signs attached that answer the question.

But most times, we are so enmeshed in our feelings and emotions to look past the facade and call a spade, a spade.

Most times, the signs are right in front of you.

All you need to do is just take off the veil of emotions to be able to see clearly.

Both of you may have a history together, and he may not want to hurt his ego by trying to get back with you.

However, there are some other things he does that’ll give him away from that he misses you a lot.

You must take care, however, and ensure that whatever you both had in the past is worth rekindling again, in case he comes running back to you.

Remember that sometimes, the past is best left where it belongs – the past.

Often, getting back together with someone is not always the same as the first time.

Sometimes, you just have to reminisce on the fond memories you shared with them whenever you miss them instead of thinking of getting back together.

Missing them is a part of moving on.

Here are some of the obvious signs that say yes to the question, “does he miss me?”

1. He Still Has Pictures Of You All Up In His Space

If there are still pictures of you on his phone, on his social media pages, by his bedside, or even in his living room, I wonder why you’re still asking the question, “does he miss me?”

He’s not over you.

Your pictures will scare other girls away and will be a source of irritation to him if he was over you.

So, yes, he misses you if your pictures are still all up in his space.

2. He Is Still Very Much Single

You’ve probably been apart for at least six months and even though he had dated some random girls, he doesn’t have a steady partner yet.

It is possible that you still occupy a space in his heart if he hasn’t found someone who can hold his attention for a long time.

3. He Asks After You From Your Friends

Wondering “does he miss me?”

If he still asks after you from your friends whenever he runs into them, it might be more than just a friendly concern.

When he is constantly asking questions that seem to pry into your private life; questions such as how you’re doing and who you are seeing, there are chances that he may be trying to weigh the odds of coming back into your life.

If not, why would he keep asking after you?

Although this may be the last thing you want to hear, it is the truth to a great extent.

When a guy begins to miss the woman they can’t have, they begin to show off certain nonchalant characters.

This may include sleeping with just about anybody and everybody to get their mind off the one woman who has their attention.

Although you’re irreplaceable, they keep trying to replace you.

This is a clear answer to the question, “does he miss me?”

This is something you may not want to hear. But, guys who miss the woman they can’t have often exhibit careless behaviors.

Like sleeping with anyone and everyone to get the girl they love off their mind. 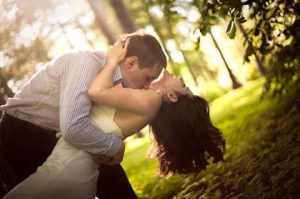 5. His Friends Whine To You About Him

The job of his friends is to help him get over his ex-girlfriend and possibly land a new girl.

So, if you meet his friends and they spin a sad tale about how he’s not been feeling or doing so well, it can be their way of telling you that he misses you and needs you back in his life.

And that’s your answer to the question, “does he miss me?”

However, his friends will barely mention him in a conversation if he’s over you.

6. He Shows Up In Unexpected Places

Showing up in unusual places such as the gym or your workplace could be a sign that he misses you.

It’ll be safe to say that he just wants to have a good look at you and reassure himself that you are still very much around.

In all, if these bumping into each other becomes more frequent, it’s a strong signal that he misses you.

7. He’s Reluctant To Return Your Stuff

At the end of every relationship, it is not out of place to ask to have your stuff back.

But if he’s not budging on giving your stuff back to you even after asking for them repeatedly, it might mean that he’s trying to hold on to a piece of you.

If he gives them back willingly, it’s a sign that he is willing to let you go and move on with your life.

Most times, guys believe that they are strong enough to let a loved one go and be perfectly fine after that.

Their mistake lies mainly in their failure to understand how much they depend on and need someone until that person is gone.

And it’ll be too late by then.

Telltale signs that he misses you lie in the organization of his life’s details away from the “normal” him you used to know.

You’ll get a clear answer to the question, “does he miss me?” when he is at low points in his life.

For instance, when he is drunk or feeling down and you’re the only person on his mind, he’ll call you right away.

It means that you are not out of the picture for him.

Take note, if it happens often.

It means that he misses you big time.