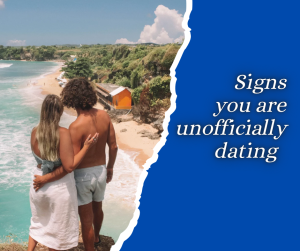 Are there any signs you are unofficially dating?

You’ll get to find out in this article.

Have you ever wondered if you may be unofficially dating someone?

This blog will give you all the answers you need.

Whether it was that make-out session or a series of text messages, you find yourself not officially dating, but involved in some kind of relationship with someone.

Have you ever fallen for someone and started hanging out with that person regularly?

You enjoy each other’s company so much, you’re blatantly flirting, yet neither of you says anything about it.

The signs you are unofficially dating tend to be displayed when going out with someone you find attractive, several times, and in different situations.

You will often get an idea of how things may progress, but generally, you are left clueless about the entire process.

Most people don’t like to admit they are in an unofficial relationship.

Figuring out whether or not you’re dating someone can be tricky.

You could consider yourself to be dating without actually being in an official relationship with someone.

However, it’s important to keep in mind that there are different types of relationships.

You might have a friend with benefits or a casual fling.

Aside from this, you might also have a crush or be going on dates with someone but not really into them.

To know if you’re unofficially dating someone, pay attention to whether or not you’ve been on more than one date with them.

If the person makes plans with you in advance and they keep to the plans, they might like you.

If the person introduces you to their friends and family members and asks about your life, they probably want something more serious.

Luckily, some signs let you know whether or not your relationship is official.

These things will give away whether or not the two of you are on the same page.

If you find yourself downplaying your interests to make him more comfortable, that’s a sign he’s not in this for the long haul.

If you don’t feel like who you are is good enough for him, then he’s probably keeping his options open.

If he’s never met your friends and barely knows your family, it doesn’t matter how much time you spend together; he’s probably just looking for an easy hookup.

If he only wants to hang out at night or when it’s convenient for him, then he’s likely not interested in pursuing a relationship with you.

If he wants to hang out but never seems to make any plans himself, then he doesn’t want anything serious.

If a guy is interested in getting to know you better and being exclusive, then he’ll put in the effort to be with you.

So, here are some signs you are unofficially dating.

13 Signs You Are Unofficially Dating

1. You Can’t Stop Hanging Out With Each Other

If you’re spending most of your free time with your date, that’s one of the good signs you are unofficially dating.

You don’t want to spend time with anyone else!

2. You Always Make Plans Together

If you’re already talking about making plans for the future, this is one of the great signs you are unofficially dating.

If you agree to go on a second date with your partner, it means that they must have impressed you.

You wouldn’t agree to see them again unless they did something right.

And now that the second date has come and gone, the third one is in the works!

If he or she acts like a boyfriend or girlfriend, real feelings are involved.

Making sacrifices for your partner shows how much they mean to you.

You should be in regular contact with each other outside of seeing each other in person.

You don’t need to spend every waking moment with this person, but they should be a regular fixture in your life.

You should feel comfortable hanging out with them without having sex and talking to them about your day without feeling like it’s a chore.

If this applies to you, it is one of the signs you are unofficially dating.

5. You Pay Attention To Details About Them

You know what their likes, dislikes, and general preferences are when it comes to pretty much anything.

You’ve been paying attention and have started to notice patterns of behavior or things they always say they prefer over others (like Chinese food over Thai food or dogs over cats).

6. You’ve Met Their Loved Ones

You’ve met their parents, siblings, cousins, and all of the most important people in their life.

Sure you might not know their childhood best friend or third cousin, but if you know their immediate family/the people who are going to have opinions about your relationship then that’s a good sign.

7. You Spend All Your Time Together

Do you want to go to the movies?

Do you want to go shopping?

Do you want to go out for a drink?

When you two start spending every single day together, that means something’s going on.

8. You Know Everything About Them

You know the ins and outs of their schedule…and vice versa.

9. They Want Something More Serious With You

They drop subtle hints about things being more serious between the two of you.

When they bring up being “in a relationship,” or being “exclusive,” they might be hinting at something more serious between the two of you than just casually dating around.

This is one of the biggest signs you are unofficially dating.

If a guy flirts with you, then it means that he wants to let you know that he likes you and he is interested in getting to know you better.

When a guy likes a girl, he will want her attention and he will try to get it by flirting with her.

He will compliment her and make her feel special, so if your guy does this, then it could mean that he wants to date you.

11. You Talk About The Future

Planning far-off dates and talking about big life events is how you know you’re moving toward making it official.

If your conversations are only about surface-level topics, it could mean that you’re not connecting on a deeper level — or that your guy is keeping his options open.

12. You Have Inside Jokes

Anyone can have inside jokes with friends, but if he’s texting them to you (and vice versa), it’s likely because he wants to call you his girlfriend and thinks of you as part of his friend circle.

13. He “Likes” All Your Social Media Posts

If he’s liking all of your Instagrams, tweeting at you instead of texting, and tagging you in Facebook posts, there’s a good chance he wants others to know that he considers you part of his life.

It’s also possible that he wants them to know what an awesome person he’s dating so they’ll be jealous that they’re not with you (but who cares?).

If you think it’s time to hang out with your dating partner outside of the official “hangout” date, then it might be one of the  signs you are unofficially dating.

As weird as that may sound, there’s a good chance that your dating partner wants to do the same thing!

There are only two real questions that you need to answer when deciding if you are in a relationship or not.

Do you have any official dates that you can add up?

And does the other person consider it a relationship?

That’s pretty much it.

Put together these two things and there should be little need for doubt about whether or not a couple is dating or just hanging out.