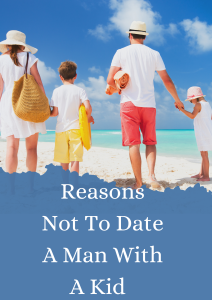 Are there feasible reasons not to date a man with a kid?

Let’s find out in this piece!

You know that you don’t want to date a man with a kid right?

Well, you’re entitled to your opinion and your reasons stand for you.

I mean, some people will frown at the idea that someone is against dating a man with a kid but then, your choice is always valid.

So, don’t forget to be vocal about what you want in a man.

If these men can desire the impossible in a woman, who are you not to “desire up a storm”?

It’s a woman’s world, after all.

If you’re a woman who is in a relationship with a man who has kids or is about to have kids, I’m sure you’ve had (or will have) questions about your relationship.

Is it normal for your boyfriend to spend more time with his children than you?

Why does he never seem to pay attention when you speak?

What do children have to do with your relationship and how can you resolve the situation?

This blog will help you answer these questions and talk about relationships from the female perspective.

Sometimes things will just look better in person as opposed to your imagination.

And dating a man with a kid is one of those things.

For some reason, many single men without kids seem to be enamored with the idea of dating a woman with kids.

You see, they believe they have it all figured out and have already been there and done that when it comes to raising a child.

They may even claim to like dealing with diapers, feeding schedules, and temper tantrums.

A well-meaning girlfriend or family member has likely tried at one time or another to hook you up with a man who has children.

If this has happened to you then, I know that you’re not completely comfortable with the idea of dating someone who already is – or already has been – in charge of making another human being happy and fulfilled on a moment-by-moment basis.

I’m here to give you some excellent reasons why you should disregard anyone’s advice about dating a guy who is a father.

There are countless reasons not to date a man who has a kid.

I’ve outlined some of them below.

12 Reasons Not To Date A Man With A Kid

This is a good enough reason to avoid dating such guys.

If you do not like children and you already know this, then do not date men with kids.

It will be unfair to both your guy and his children if you go into such a relationship with this mindset.

2. He Is Still Married

Most men who have children were married when they had their children, so there are high chances that he has not divorced yet.

The marriage could have ended years ago but the divorce process has not been completed yet for some reason or another.

You may consider yourself as just being a rebound girl for him until he finds someone permanent to settle down with, but it does not matter at the moment.

The truth remains that he is still married till the divorce is finalized.

A man with a kid will never spend as much time with you as he does with his child.

The bond between a father and his daughter or son is strong, and that doesn’t go away just because he gets into a new relationship.

Your guy may do all he can to spend time with you, but that still won’t be enough for you.

You’ll always feel like third best to his kid and the mother of his child.

4. He Has Little Or No Money To Spend On You

Even if your guy makes good money, most of what he earns goes to his child support payments or to taking care of his child in other ways.

If you want someone who can take care of you and pamper you, then dating a man with a kid is not the right thing for you to do.

The only person who is going to benefit from him in the relationship is the guy himself because he won’t have any extra to give or share with you.

You’ll be lucky if he can afford to take you out once in a while!

This one is not negotiable.

If you want to date a man, you have to accept the fact that he comes with his kids (unless of course, he’s a single dad with sole custody).

Do not expect him to go back and forth from his apartment to yours like a bachelor because it’s just not happening.

You will be spending time with his kids and vice versa if you accept his proposal of going out on a date.

You will have to meet them sooner or later and it is always better if you get introduced by someone who loves you rather than by someone who hates your guts.

You won’t get the same attention that you would get in any other relationship.

This is not something wrong; anytime you are in a relationship with someone who has kids, their kids will always come first.

It doesn’t matter if their father or mother is around or not, they always need their parents and if that parent happens to be the person you are dating, then you have to accept this fact as well that your partner comes second and his/her kids come first.

7. Your Time Will Not Be Your Own

First and foremost, you have to realize that when you first start dating someone with a child, your time will not be your own.

Planning dates and vacations will be difficult because his children will always come first.

It doesn’t matter if he has full custody and doesn’t pay child support; his children need him, and he needs them.

This means that even when he does have free time, he may choose to spend it with his kids, which can be very frustrating for someone who is used to having all of their partner’s attention.

8. He’s Got Baggage, And You Deserve Better Than That

It can go one of two ways for the guy with a kid; either he is a complete train wreck, or he is the most put-together guy in the world.

Chances are if you’re dating him and meeting his kid, he’s already divorced/split up with his baby mama (or at least separated).

And that means baggage; lots of it.

Dealing with an ex that still causes drama in his life is probably the worst thing any woman can deal with when entering a relationship with a new guy.

It’s just not worth it to have your significant other have to deal with all sorts of bs from an ex that won’t go away.

You deserve better than to be second best because he still cares about his ex and has to deal with her regularly.

9. Your Social Lives Will Be Vastly Different

You may want to spend an entire weekend doing nothing but watching movies from your couch at home, he may only want to spend Saturday morning at home before meeting up with his kid for the rest of the day.

This may be obvious, but it’s important to note that being a parent is a big deal.

It’s not just about taking care of your child, but also about making sure you’re there for them, making memories, and spending time with them.

Kids need their parents’ love and attention all the time.

They’re going to want to spend time with their parents, so you’ll have to get used to sharing him.

If he has kids, chances are he’s going to want to spend a lot of time with them and he probably should no matter what his relationship status is.

This can cut into your relationship with him so you’re going to have to learn how to deal with that.

If he’s got kids, there’s a good chance that his ex might have cheated on him or even left him for another guy.

This can be hard for any guy because no one likes being cheated on or dumped for someone else.

If you date him, you should be prepared to deal with this because it might lead to trust issues down the road for both of you.

Regardless of the reason for relationship problems, you should still visit a professional.

Many people turn to the internet for dating advice and tips.

We’ve never met in person, so we don’t know what kind of advice you will receive from this article or others like it.

You may want to consider seeing a counselor or even a psychologist before you decide about whether or not to date a man with a kid.

Depending on your reasons for wanting to avoid dating a man with a kid, you may want to use any second opinion that’s available before making a final decision.