Respect and love are intertwined.

When people fall in love, there is meant to be mutual respect for each other, but sometimes, respect is usually earned and not given.

Some men may find it easier to love their women than to respect them, especially as society doesn’t require respect from a man to his woman.

How to Make a Man Respect You

Self-respect is one of the ways to earn respect from your partner.

If you hold yourself in high esteem, it will be difficult for anyone to disrespect you.

Set a standard for yourself and do not compromise your standard because you want to seek validation from anyone.

#2 Don’t compare yourself to other women

A lot of girls are insecure and they constantly make this obvious to their partners.

Don’t keep talking about how much of another person you wish to be.

For instance, wanting to have a bigger hip, fuller boobs, straighter legs like another woman only make you seem like you are not confident in your own skin.

This might make you lose the respect of a man whose love and attention you crave.

Crying is good. It helps to relieve tension. However, becoming a cry baby at every slightest provocation could make you appear weak and dramatic.

While being a little dramatic is fun, becoming a compulsive drama queen could make a man take you less seriously.

He/you probably can’t wait to have sex but usually, men need time to fall in love and get it in their heads that you are indeed the right one.

If you want something real and lasting, it’s advisable to take your time before getting busy between the sheets with him.

A man respects a lady he can have intellectual conversations with.

Don’t hold back your opinions, express your views without being rude even if they contradict his.

He will respect you for being able to politely state your opinions in a debate.

#6 Respect him as well

They say “respect is reciprocal”, a lady should respect her man and he would reciprocate.  Do unto him what you want him to do to you. 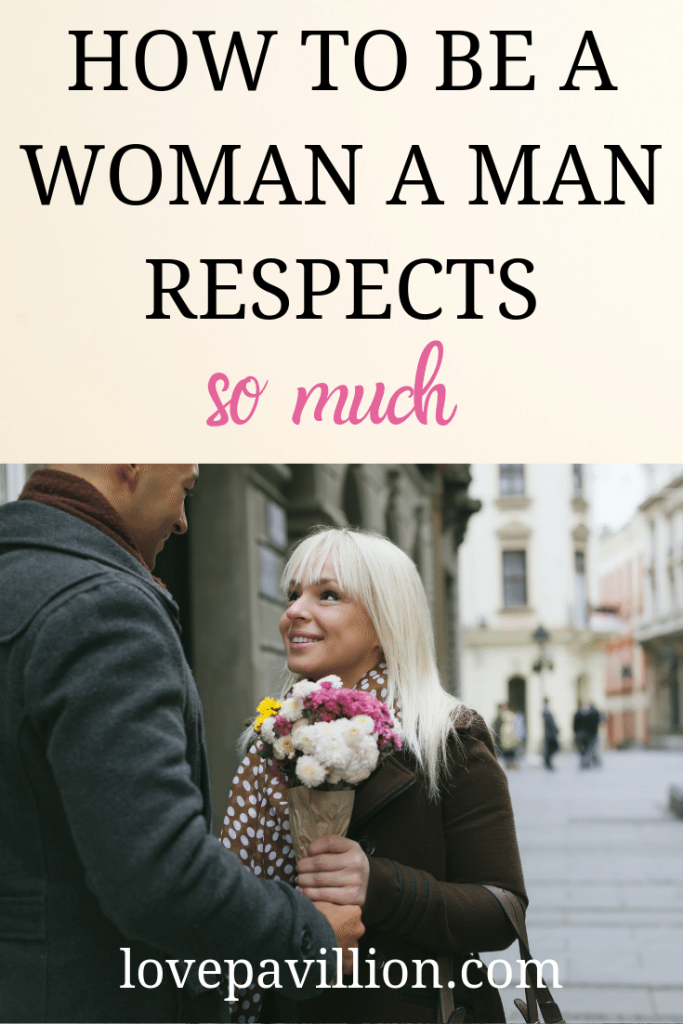 Knowing you are his solid support system and a shoulder to lean on every time will earn you his respect. And make sure that you don’t let him take you for granted.

#8 Teach him how to treat you

It’s easier for a man to respect you when you know what you want and you want to be treated; instead of leaving him to treat you how he thinks best, which might fall short of your standards.

You are more likely to be respected when you don’t let yourself be treated like trash.

Learn to calmly set the records straight and let your man know you won’t put up with any form of mistreatment.

This will guide his behaviour towards you if he truly loves you.

Being too hard on yourself makes you look insecure. Feel free to laugh at yourself and take a joke.

This will not only make you fun to be with but also shows you love yourself despite your imperfections.

Don’t keep your dreams and aspirations away from him.

Clearly state your ambitions and do not assume that he won’t support you.

This shows that you have a life of your own and you’re not just about him only.

Being truthful is one of the sure ways of earning respect. A man wouldn’t respect a woman who lies so much and can’t be trusted.

Stay true to yourself.

You don’t need to act like a superwoman for a man to love and respect you, and do not portray yourself to be what you assume a man wants you to be.

Just be yourself and strive to be the better version of yourself.

His efforts to make you happy shouldn’t be taken for granted.

He respects you the more when you not only say it but prove through your actions that you are appreciative of his good deeds.

In conclusion, there is exactly no manual on how a man should respect a woman because every woman is different, but these thirteen points could guide a woman into understanding how she wants to be respected.

It is also important to note that some men are narcissistic and may not respect any woman regardless of how she tries. But any woman who respects herself shouldn’t have anything to do with such men.

THINGS YOU SHOULD NEVER SAY TO YOUR SPOUSE