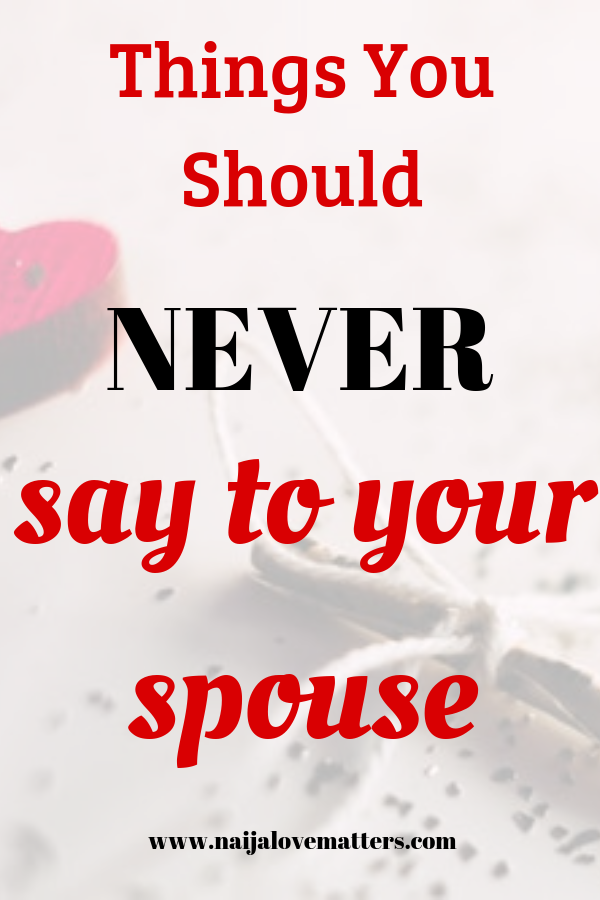 While it is important for partners to freely express how they feel to each other, words must not be used carelessly. Words are powerful. Words could break or mend, so it is important to be mindful of what we say to our spouses, especially in moments of conflicts. Conflicts are bound to happen because we are individuals with different personalities, upbringing, likes, and dislikes, although bound by love.

Here are some of the things you should never say to your spouse:

To be honest, many of us have family and friends who do things we’d love our spouses to do. But comparing them with others may never change a thing.

Words such as “Sarah never asks Patrick to do chores”, “Patrick helps Sarah with the dishes while you don’t” “My mom/dad always did it this way”  “My ex used to do it this way” should never be said to one’s spouse.

Rather than compare, focus on your spouse’s contributions and strengths, appreciate what they do right and lovingly make a request of what you want them to do better and encourage them to improve.

“I Wish I Never Married you”

Disagreements are unavoidable in marriages, but to say that you wished you had never married your spouse is not a nice thing to say and will only make things worse and does nothing to solve the underlying issue.

Obviously, that’s what you felt at that moment, but it wasn’t what you thought on your wedding day when you decided to walk down the aisle.

It is baseless and non constructive to apportion blame when things go wrong. It only breeds more anger and cause disconnection. Instead, individuals should consider how they contributed to the problem.

Also, directly ask of your spouse for what you would like him/her to do differently instead of assigning blame. Instead of saying, “Well, we wouldn’t be late if you had cleaned the car in time,” say, “Could you start cleaning the car earlier?  I will help out with the kids to make that possible.”

“I will get a divorce”

You should never threaten your spouse with divorce when angry or having a fight. It causes mistrust and brings a feeling of uncertainty in the marriage. The other person might think you wouldn’t have to say that if you truly love him/her.

Instead, explain your feelings and what you would want your spouse to do differently in the future. It is better to take a short, intentional break when angry than to talk rationally, then you go back to the conversation later when you are calmer.

“I make more money than you”

This kind of statement will never yield anything good. It shouldn’t matter who makes more money, remember you are a team working together for the common good of the home. So, you both feel empowered and entitled, because the money is equally for both of you regardless of who brings more to the table.

Critical words have never really helped in fixing problems, they are often said from a place of pain. Some people think saying these hurtful words would make them gain the attention of their spouses or force them to change unpleasant habits, but no one wants to hear such, it could worsen things. Rather, tell your spouse how much you love him/her, but treating you unfairly could breed hatred.

“I can’t ever forgive you for that”

Love can not exist without forgiveness. No one is perfect and we all err.

Many think silent treatment is the best approach to handling disputes between them and their spouse, but it is very dangerous to a relationship. Stonewalling leads to disconnection and frustration. Rather, tell your partner you need some time to “cool off,” and then willingly go back to the conversation later to make your view known for resolution to happen.

It is better to take it up with your spouse in explaining your feelings and making a direct request if you have issues with their behaviour. There is no point “ganging up” on your spouse in order to make your point known. Rather show immense support to your spouse when it comes to other people’s criticism.

No matter how much your spouse loves you, they wouldn’t condone any form of disrespect on the parts of their parents. So, never bring their parents into the conversation in the heat of an argument.

Find a sensitive way of telling him/her what to do differently, or how to go about it. You need sex, but maybe not the way you’ve been having it.

Words are soothing and could heal the brokenhearted when properly stated. Critical words don’t fix things, hence, the need to cautiously address our loved ones so that we bring out the best in them.