At some point in most long-term relationships, it becomes difficult to figure out the intents of your partner.

When it comes to ladies in relationships, no one is in for the long haul, to waste their time. There are evident signs he will marry you someday.

Sometimes, they might not be clear to you. If you want to know your stand in your relationship, here are 6 clear signs he wants to marry you.

6 Signs He Wants To Marry You Someday

If your man is open to you about important things that matter to him or things that bother him, that’s a sign.

One of the signs he sees himself marrying you is that he’s making plans and you feature in them.

Men don’t ordinarily bring up a topic they don’t want to talk about.

So, if he wants to talk about the future and needs your opinion, he’s with you for the long haul.

Your man will always want body contact whenever he’s around you.

He’s either stroking your legs, kissing your cheeks, or rubbing your neck while you’re busy.

You always take the spotlight for someone who wants to do forever with you.

Even amid a thousand ladies, all his attention is on you.

You’ll find that he’s always trying to create more time to be with you.

He makes efforts to see you every chance he gets. That’s a good sign that he wants to marry you someday.

If he has ever mentioned that he wants to marry you, it shows that he’s comfortable with the thought and wants to know if you’re on the same page with him.

What Do Guys Look for in a Woman They Want to marry?

Here are some of the things guys look out for in a woman they want to settle down with:

He wants to know that you’re involved in his life and are willing to attend events with him. It shows him that you’re committed to him.

He wants to know that you’re on the same page with him concerning plans for the future.

If he’s making plans for the future and you’re in it, he wants to know that you accept to be in it.

A guy likes a partner who is constantly helping him make crucial decisions.

He wants someone who can check through his plans and know what’s best for him.

He wants to know that you have his best interest at heart.

He wants to know that you support his life goals and push him to become better.

Like every other person, he needs a partner who will be his cheerleader and lift him.

This is an important factor every guy considers.

When the physical beauty fades, is he still attracted to your personality, character, and intellect?

He wants to be with someone who he’ll remain attracted to if he’s in for the long haul.

How Long Does It Take To Know If a Guy Wants to Marry You?

This question has remained unanswered over time but a new study has given a hint of the possible answer. It shows that it takes approximately six months to know if you want to settle down with someone you’re seeing.

The study says that the first three months is for the honeymoon stage of the relationship. After then, the initial feelings wear off and you begin to notice things about the other person.

It is at this stage that you get to decide if you can live with them, or if you’re calling it quits.

Signs He Doesn’t Want to Marry You

Outlined below are clear signs he doesn’t want to marry you.

A sign of non-commitment is if he cancels last minute on plans you’ve been making for a long.

It shows you’re not at the forefront of his mind.

You almost don’t exist romantically to him.

He rarely shows any form of affection when you’re in public.

He isn’t possessive of you and doesn’t like to introduce you properly to people.

He won’t let you meet his family or even his friends.

He doesn’t involve you in his plans.

He isn’t interested in meeting members of your family and doesn’t bother inviting you to family events.

One has to be interested in weddings and marriages before they begin to think of settling down.

If the idea of a wedding or marriage puts your man off, that’s a red flag.

He’ll most likely not marry you.

You’ll find that he still acts very much like a bachelor, even while in a relationship with you.

He flirts with other women and his circle is filled with single guys.

This is one of the obvious signs he doesn’t want to marry you. 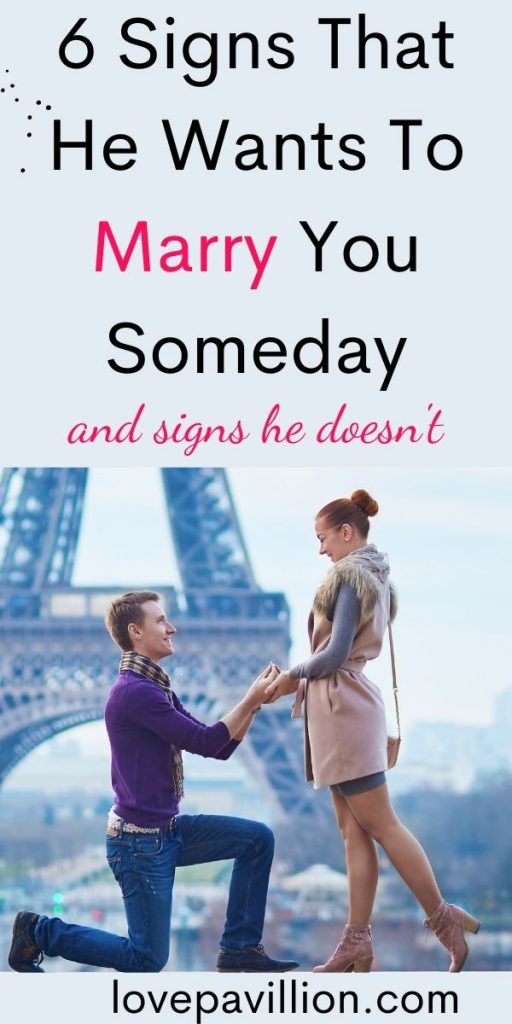