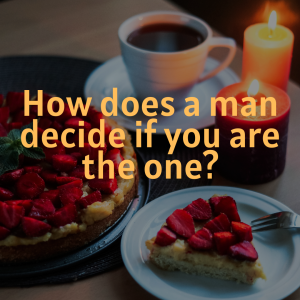 How does a man decide if you are the one?

What are the signs?

Do men even fall in love?

Among all the questions a woman can ask, one is the most important: How does a man decide if you are the one?

After dating lots of women, a man has a better chance of finding his soulmate.

At the same time, there are so many women who want to know how to attract men.

Some women even follow those silly dating advice listed in books, magazines and blogs.

But a modern man is different from their ancestors’ generation.

Although some men don’t want to admit it, only a few of them will still choose someone based on her outer appearance.

Does it feel like you have tried everything to know how a man decides if you are the one?

There is no mistaking the fact that finding out how a man makes a decision on determining whether or not you are the right girl for him is a matter of great importance.

The best advice for figuring out whether or not he is thinking about having a serious relationship with you is understanding why men make decisions on dating women in the first place.

You can’t marry him unless he thinks you’re the one and you wouldn’t go out with him if he didn’t think that!

This piece explores this phenomenon and attempts to help women understand men better.

Have you ever been in a situation when you or someone else was trying to figure out if someone is the one?

Issues of compatibility, intimacy and communication are common problems many people face.

If you are trying to figure out how to become more alluring to men, you cannot leave out the fact of how a man’s brain works.

Understanding how a man’s mind and body work together can help you decide what type of a woman he’s looking for and allow you a greater opportunity to meet his standards.

How does a man decide if you are the one?

And how do you know if he’s The One for YOU?

Both women and men ask these questions all the time.

This article focuses on how to answer these questions from the man’s point of view.

Read on to get the answers to your questions.

How Does A Man Decide If You Are The One?

There are so many things that make a guy decide if you are the one.

These are some of the ones that stand out to me:

1. He Enjoys Spending Time With You

You don’t have to be doing anything special or exotic.

If you’re just sitting and talking, and he’s enjoying your company, that’s a good sign.

Trust isn’t something that comes easily to everyone.

If a guy has trust issues, it may take him longer to realize that he trusts you.

It’s worth noting here that trust is very different from being gullible.

A man also wants to be able to trust a woman.

If he feels like he cannot trust you, then he won’t feel comfortable approaching you.

This means that when you meet someone for the first time, don’t lie about your age or what your job is.

Men can sense when someone is withholding these important pieces of information.

And it is a turn off, especially if they asked directly.

3. You Have Similar Interests

This isn’t a requirement, but it makes things easier.

4. He Feels Comfortable Around You

Does he feel comfortable talking about his problems?

These are all signs of being comfortable with another person.

5. You Get Along With His Friends And Family

He needs to know that the people he cares about accept you, because they’ll be part of his life even when the two of you aren’t together.

When a man looks at a woman, he feels like he can bond with her.

When you bond, you feel connected and safe.

A man will often look at a woman to see if she is approachable or if he feels that she looks mean or angry.

A man will also look at a woman to see if she looks open and friendly.

7. He Finds You To Be Approachable

If a man sees that you are the kind of person who is friendly and approachable, he will be much more likely to approach you.

This means that when you meet a man and want to get his attention, smile at him!

It will make it easier for him to approach you.

8. You Have An Emotional And Intellectual Connection With Him

A man wants to feel like he can connect with a woman on an emotional level and on an intellectual level.

He does this by talking about things that interest him, such as his hobbies or interests.

If you want to attract and keep a man, make sure you find common interests so you can talk about things that both of you enjoy!

That seems too simple doesn’t it?

But it really is that simple.

The man decides when he says it.

There is no indication of when a man will make that decision, but it is the only way you will know he has made it.

10. He Starts To Talk About His Plans For The Future, And You Are In Them!

If your guy starts talking about his future life with you in it, then he has decided that you are the one for him.

He will start talking about having children together and buying a home together, planning your retirement together and so on.

It doesn’t matter if these are dreams, or what they actually end up being; this is how men show they have made their decision – by including you in their future plans.

4) He doesn’t criticize you or put you down.

5) He makes an effort to understand and empathize with your feelings and point of view, even if he doesn’t agree with it.

6) He respects your boundaries and takes “no” for an answer when necessary.

7) He supports your dreams, goals, and ambitions.

8) He accepts you as who are right now and doesn’t expect perfection from you all the time.