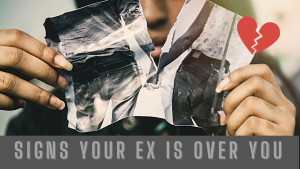 Wondering if your ex is over you?

Your mind might tell you they are and you should move on with your life but your heart says otherwise.

While there is no foolproof way to get an ex back, this article will reveal the most common signs your ex is over you, so you can make a better decision based on facts rather than wishful thinking.

When you break up with your significant other, you want closure.

You want to know they’re done thinking about you and onto someone else, because it’s easier to move on if you don’t have to constantly wonder what they’re up to.

But how can you really know for sure that your ex is over you, and is moving on?

You wish you had a dollar for every time someone said to you “My ex still texts me, my ex is over me, my ex follows me on Instagram, why won’t my ex leave me alone?”

There are probably a million reasons why this is happening.

Exes don’t just forget about each other easily.

They tend not to just walk away from their past relationship in the snap of a finger.

They have spent the majority of their life with that person and breaking those bonds isn’t something that happens overnight and sometimes even not over months or years either.

You see, when two people come together and build a foundation of trust, admiration, love and then ultimately end it; it doesn’t just vanish into thin air.

Sometimes even when they want to let go of the past they find themselves stuck in it and unable to move on.

So you want to know if your ex is over you, right?

Many people are curious about whether or not their ex is still thinking about them.

How would you like to know if they’ve totally moved on or if they want to get back together?

This article is about signs that your ex is over you.

You would be aware and would have observed that it takes time for a man to get over his ex-girlfriend after a break up, even if he had a bad relationship with her.

However, if the break-up happened a long time ago or it appears that he is not willing or interested in getting back with you, then these signs will give you the right insight into whether your ex is ever going to come back to you.

It’s never easy to tell if your ex is over you, but luckily, there are some signs that can help you figure it out.

Read on to find out.

13 Signs Your Ex Is Over You

1. If Your Ex Has Stopped Contacting You, He Could Be Over You

One of the most obvious signs your ex is over you is when he stops calling and texting you.

This can make it seem like he doesn’t care about you anymore at all.

It happens because he’s trying to avoid any contact with you in order to speed up the process of getting over you.

2. If Your Ex Doesn’t Ask About You Or Your Life, He Could Be Over You

If your ex used to ask a lot of questions about what was going on in your life and now he doesn’t do that anymore, it’s probably because he’s no longer interested in what’s going on with you.

He might even stop asking mutual friends about how things are going with you as well.

3. If Your Ex Starts Dating Someone New, He Could Be Over You

Moving on with another person is a clear sign that your ex is ready to get over the breakup and move on with his life without being stuck thinking about the relationship constantly.

When an ex starts dating someone new, it shows that he’s moving past the relationship and trying to get on with his life.

4. They Don’t Want To See You Or Talk To You

Even if they want to remain friends, it’s not going to happen.

An ex who wants to stay in touch is looking for something.

They don’t want anything from you, and make no attempts to contact you or see you.

They are no longer upset by the break up.

If they were really over you, then they wouldn’t have a problem seeing that new person on your arm.

If they show any hint of jealousy, there is something there still.

They have moved on and are trying to get with someone else, but their feelings towards you are still unresolved.

5. They Seem Happier Without You Than They Ever Did With You

If they seem happier without you than with you, then it may be time to move on yourself and find someone else who will appreciate all that you have to offer.

6. They Don’t Flirt With You Anymore

Flirting is one thing that guys do when they want to let you know they’re romantically interested in you.

So, if he used to flirt with you before the breakup and now he doesn’t anymore, chances are he’s not interested in having a relationship with you.

7. They Don’t Try To Make You Jealous Anymore

When a guy wants to get back together with you, he will do anything to make sure he gets your attention — including trying to make you jealous by flirting with other girls in front of you or by posting pics on social media with them.

If your ex isn’t doing that anymore, they may have moved on and just want to stay friends with you instead of getting back together.

8. They’ve Blocked You On Social Media

It is one of the most obvious signs your ex is over you.

If they’ve completely blocked you out of their lives, then they’re clearly over you.

And if your ex has unfriended or blocked you on social media, don’t take it personally; rather, think of it as a blessing in disguise because it will help make getting over them easier for you.

9. They’ve Been Posting About How Happy They Are Without You

If your ex is posting about how happy they are without you (and this includes posting cryptic statuses and sharing songs that talk about moving on), then it’s obvious that they’re not only over you, but also have found someone new who makes them happy.

10. They Won’t Stop Talking About Their New Relationship

You might be able to tell that your ex has moved on if they start to talk openly about their new relationship.

11. They Don’t Want To Hang Out Anymore

If they’re not interested in hanging out with you anymore, it could be because they’ve moved on and are spending time with someone else.

They ghosted your texts for a week and then started texting again like nothing happened.

If your ex ghosted your texts for a week and then started texting again like nothing happened, it’s possible that they have moved on and are just texting you back because they feel bad about having ghosted you for a week, which would be the case if they were actually over you in the first place.

13. They Don’t Care About What You’re Doing Anymore

If your ex doesn’t care about what you’re doing anymore, it may be because they’ve moved on and no longer care what you do or who you hang out with any more.

This is because they’re no longer interested in being in a relationship with you any more, which would be the case if they were actually over you in the first place.