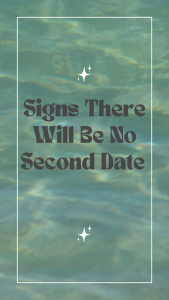 How can you tell the signs there will be no second date?

What are the signs that this won’t go any further?

The possible answers to these questions depend on your gut feeling, experience, and what you saw or heard when you met the person in question.

But there are also some behaviors you can look out for that tend to be a pretty good indication of what’s to come.

In this article, I’ll give you some of these signals that things aren’t going to go any further.

There are many signs that he won’t call you again and signs that a second date is not on the cards.

Learn to spot as many of these warning signs as possible and you will save yourself time, heartache, disappointment and will be able to have more fun with the guys that like to spend time with you.

If you’re single, you might have been through the experience of a first date and thought it went well, only to never hear from that person again.

We can all relate, as it’s frustrating and sad when that happens.

You wanted to go out again but don’t know why they didn’t ask or maybe, you’re wondering if there was something wrong with you or what happened during the date that caused your date not to ever reach out.

It can be hard to figure out why someone didn’t ask for a second date.

We all have bad dates.

But sometimes, you can smell it from a mile away…like a skunk or something.

If you’re trying to decide whether there will be a second date, then this blog is for you.

Here we’ll be looking at things to watch out for and some signs there will be no second date.

You had a first date and you think it went well — but then your date never calls you again.

A first date is a stepping stone for all things love-related.

When you have a crush on someone and you finally score a date with them, it feels like everything will be rosy forevermore.

But in reality, the date itself can be a make-or-break situation.

If you’re not finding any chemistry between the two of you and you’d rather not embarrass yourself by letting your date know that, just keep an eye out for these signs that they’re not interested in a second date:

1. They Keep Checking Their Phone

If your date keeps checking their phone constantly and doesn’t bother to put it away, then you may as well call this a lost cause.

They don’t care about spending time with you or getting to know you.

All they care about is what’s going on somewhere else.

They’re on their cell phone the whole time.

There’s nothing more disrespectful to me than someone who looks at their cell phone while I’m talking to them.

So if you’re doing it on a date with me, I won’t ever forget it and there definitely won’t be a second one.

2. They Eat Way Too Much Or Too Little

You don’t want to be with someone who doesn’t eat and just picks at their food all night long because that could mean that they have eating disorders and aren’t comfortable in their own body.

Likewise, if someone eats an obscene amount of food, it could be a sign that they have no control over themselves when it comes to food and you probably shouldn’t get involved if this is the case.

3. You Arrive And They’re Not There

Now, maybe they’re late because of traffic or a meeting that ran longer than expected, but maybe not.

Maybe this is an indication of how they’ll treat you in the future: thoughtless and inconsiderate.

If you’re going to wait around for them, be aware that this could be a sign that there will be no second date.

4. They Don’t Ask Questions About You

If your date isn’t interested in learning more about you, then why are they there?

They could just as easily have stayed home or gone out with friends instead of wasting their time with their lack of interest in knowing more about the real person behind the facade.

This is a sign that there will be no second date.

5. The Conversation Is One-sided

The conversation should be an equal exchange of information or stories from both parties.

If one party dominates the conversation or if it’s clear that one person is not interested in what the other is saying, it can create an awkward atmosphere.

It’s important to have good eye contact during the first date because it shows that you’re interested in what the other person is saying and it makes for better communication between the two of you.

7. You Get Cold Vibes From Them

Sometimes during dates, there are signals body language can give off that may mean “this isn’t working out so well”.

If your date leans away from you or doesn’t lean towards you when they talk then they may not be interested in seeing you again.

8. You Find Them Unattractive

This may sound blunt but sometimes, physical attraction isn’t there and that’s okay!

There are plenty more fish in the sea.

If you’re in the market for a new mate, you don’t have time to waste.

That’s why it’s important to pay attention to the signs there will be no second date before you invest too much time and energy.

9. You’re Not Feeling It

If you’re on a date and can’t stop thinking about getting back home or what’s on TV that night, call it quits.

You’re wasting your time and theirs.

Don’t lead them on because you feel bad about ending the date early.

You can’t force chemistry or compatibility.

10. The Only Thing You Have In Common Is What You Ordered For Dinner/Lunch

The conversation should flow naturally when two people are enjoying each other’s company.

If there’s no spark of attraction or emotional connection during the first date, don’t expect it to develop later on.

You can tell a lot by the way a guy looks at you.

If he’s not looking at you, he’s probably not feeling it.

And if he’s not feeling it, what’s the point of going on a second date?

12. He Doesn’t Ask For Your Number

If a guy is interested in you and wants to see you again, he’ll ask for your number.

Even if he’s shy, he will find a way to get it from you somehow.

So if he doesn’t ask for your number, that means that he simply isn’t into you and doesn’t want to see you again.

13. He Only Asks About Surface-level Things

If all he talks about is small talk and basic stuff like what you do for work or where you went to school, then there is nothing deeper happening between the two of you.

If there was chemistry and something deeper happening, then he would be asking more involved questions about your life and interests.

13. They Check Other People Out

It doesn’t matter where I am – if I see my guy checking out another woman, I’m not okay with it.

If they get distracted by anyone else around them, don’t expect to get your time back.

14. You Picked A Bad Place To Meet

The location you choose for the first date can either make or break your chances of getting a second date.

A lot of people make the mistake of choosing a public place that is too crowded or noisy.

This makes a first date very uncomfortable and awkward because it is hard to keep up with the conversation and you don’t even get to know each other.

It is also not good to go somewhere too quiet where it is just you two.

That can be uncomfortable for both parties, too.

You want to go somewhere where you can have a relaxed conversation and get to know each other better.

Going for drinks at a bar might not be the best idea for a first date, but if you do, try to pick somewhere that’s not too loud or crowded.

It’s normal and healthy to give someone a few chances before you decide they are not the one (or before they decide that you’re not).

But if there are signs that this date won’t lead to another and you want there to be, try asking directly how your date feels about things.

Remember, it’s better to know now so you can move on with your lives and maybe have a second date with someone else some time in the future.