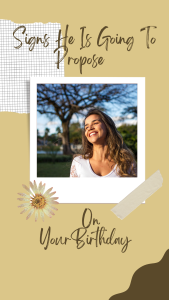 What are the signs he is going to propose on your birthday?

Some women may be truly obsessed with getting engaged to the special guy on their birthday.

Others, however, have no sign he is going to propose except for planning a day out together.

You would like to know whether your boyfriend will get on one knee and propose to you on your special day, wouldn’t you?

Today, we’ll help you find out if there is a chance that your boyfriend is going to propose to you on your birthday.

If you are in this situation, then it might be important for you to read this article.

There are many signs that a man might be getting ready to propose, but women often miss these signs when it comes to the most important relationships.

You may have heard that the average guy takes about six months to propose, but in reality, it’s likely to be longer.

You’ve probably wondered how long you’ll have to wait, and how you’ll know when it’s happening.

Well, I’m here to give you a little insight that should make things easier for you.

From his family asking about your ring size, to him knowing exactly what kind of engagement ring you’d want, we’ve got all the signs he is going to propose on your birthday!

Today, I’ll be spilling all the details on how to tell if he’s going to pop the question on your big day.

I hope you enjoy the read!

16 Signs He Is Going To Propose On Your Birthday

If he has been extra attentive lately, it could be because he’s trying to butter you up before popping the question.

Guys who are about to propose are typically over-the-top sweet and go out of their way for their girlfriends.

They may even do some little things that make them feel guilty beforehand (because they have a big secret).

2. He’s Avoiding The Topic Of Marriage

He may not be bringing up marriage because he knows what’s coming soon.

If you have talked about tying the knot in the past and he seems to be avoiding that conversation, it could mean he doesn’t want to ruin his surprise!

Before proposing, most guys get super nervous and act strangely.

For example, he may get quiet and distant when he is thinking about popping the question or talking to friends and family about it.

Or maybe, you’ll notice him nervously scratch his head or lose his appetite?

Proposing takes a lot of courage.

He may be been hinting at a proposal for a while now, and you’re just not picking up on it.

If it seems like he’s constantly talking about spending the rest of his life with you or getting married, there might be a reason behind it.

If he knows your ring size, knows the type of ring you want, and has the inside scoop on what you’d like him to propose, then there could be something in the works.

6. He Talks About Your Future Together

If he mentions moving in together or planning a trip six months down the road, then that could be because he’s envisioning those plans with you as his wife.

7. He Tells You His Plans For The Future

If he tells you where he sees himself in five years, 10 years, and beyond, then there may be something more to it than just small talk.

He may be telling you this because he wants to make sure that they align with your plans and hopes for the future as well.

8. He Tells You Not To Make Any Plans For Your Birthday

If he tells you not to make any plans for your birthday, it could be a sign that he is planning something special for you on that day.

He might have booked a restaurant or bought tickets to somewhere special and he doesn’t want you making plans that would interfere with what he has planned out.

If he says things like “I will love you forever” or “I will always be here for you,” it means he wants to commit to you for eternity.

Men don’t say things like this if they don’t mean them.

10. He Asks What Type Of Engagement Ring You Want (not an exact type but a general idea)

If he asks you questions about jewelry, it means that he wants to know what type of ring would look good on your finger.

This shows interest in getting engaged, so this is a sign that he wants to propose soon.

He also asks about your ring size.

When a man is ready to propose, you better believe he’s going to want to get the ring right.

If your partner has been dropping hints about which finger you wear your rings on, or how big each of them is, there might be a proposal in the works.

11. He Asks About Wedding Plans

If your man casually brings up topics such as wedding themes and honeymoons, it means that marriage is on his mind and he is thinking about marrying you shortly.

12. He Avoids Conversations On Proposals

If you were to ask a man about the upcoming proposal, he would either avoid the question or act nervous.

If he is not willing to talk about it, then there is something in store for you.

Sometimes, you need to read between the lines and understand his body language.

If he is acting nervous and impatient, then this must be one of the signs he is going to propose on your birthday.

Moreover, if he has been asking too many questions regarding wedding plans and marriage, then this is a clear indication that it’s time to get married.

If he has been hinting at having a joint bank account or even purchasing property together, then this is one of the signs he is going to propose on your birthday.

This can be a strong indicator that it’s time for you both to take your relationship ahead.

If he has been referring to you as ‘his wife’ on numerous occasions, then this could be a sign that he might propose on your birthday.

However, make sure that you don’t ask him about it directly because it will give away his plan.

16. Your Parents Have Been Spending More Time With Him Than Usual

If your partner is getting close to popping the question, likely, he’s already asked one of your parents for your hand in marriage.

So if you’ve noticed that your mom and dad have been spending more time with him lately, they might be giving him some marriage advice or helping him find a ring that would suit you best.

In the end, it all comes down to common sense.

That pretty much sums up my thoughts on this matter: if you are both happy and in love, then there’s absolutely no reason why your boyfriend shouldn’t propose to you on your birthday.

Just be sure that he knows how to properly set the mood – it’s the day you were born for a reason, after all.