Are there sure Ways to Tell You’re Dating a Mature Man?

It can be tough to tell the difference between a boy and a man.

Especially where the individual has a fusion of the characteristics of a man and a boy.

Sometimes some guys appear to be men but are boys in disguise.

Trust me, I’ve been there and I can tell you for sure that as simple as it seems to decipher these boys, it can be a tad confusing.

If you’re lucky enough to be dating a mature man, here are 10 signs that will let you know for sure.

1. He’s established in his career.

A mature man has usually worked hard to get where he is in his career.

He’s not content to coast by on his good looks or his charm.

He wants to make something of himself and he’s usually done just that.

This doesn’t mean he’s too busy to make time for you, but it does mean he knows how to juggle work and play without letting either suffer.

However, you cannot just lean on this to determine he is a mature man.

There are a ton of early starters out there who are also established in their careers and are getting it right.

So, do not let this be the sole determinant of your conclusion.

2. He’s not afraid of commitment.

A real man will show you he is not afraid to commit to you.

If you are not sure about his depth of commitment to you, check these signs to know where he stands.

However, while boys avoid commitment like the plague, men know that commitment is what makes relationships last.

If your guy is ready and willing to commit to you, it shows that he’s serious about your relationship and ready for something long-term.

No more games, it’s time to settle down. 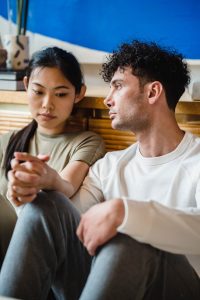 A mature man will never let you do second guessing or analyze situations when there is an issue.

He has no problem communicating anything and everything with you.

When something is bothering him, he’ll tell you directly instead of letting it fester until it explodes into a big fight.

He’s not afraid of conflict or difficult conversations because he knows they’re necessary for a healthy relationship.

Likewise, he’s also good at listening when you need to vent or just share something important with him—no judgment, no lecture, just understanding, and support.

4. He takes care of himself and you. 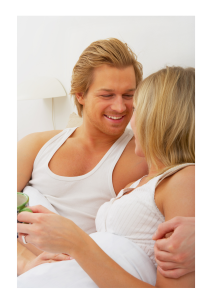 A mature man knows that taking care of himself is important if he wants to be around for the long haul.

He eats right, exercises regularly, and tries to get enough sleep so he can be at his best for both himself and his partner.

And speaking of his partner, he also knows how to take care of her when she’s not feeling her best—whether it’s making her soup when she’s sick or just giving her a back rub after a long day at work.

He knows that falling sick is expensive on all sides and as such, he stays in perfect shape and ensures the same for you too.

5. He has hobbies and interests outside of work and leisure activities outside of your relationship. 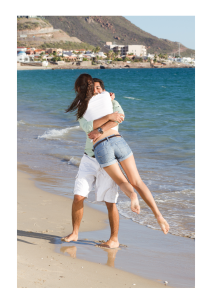 A mature man knows how to strike a balance between his work and life.

He has other interests and hobbies that keep him well-rounded and interesting as a person.

He is not a workaholic that has nothing going on in his life aside from his work.

He knows the essence of having a blend of it and he does it effortlessly.

Also, for his leisure, he knows there’s more to life than being in a relationship with you.

As such, his leisure activities are not limited to being in a relationship with you.

As much as you’re both into each other and are in sync over a whole lot of things, he understands the place of maintaining individuality.

He knows how important it is to have friends outside of the relationship so he doesn’t end up smothering you or becoming overly dependent on you for companionship.

Quality time together is great, but everyone needs some breathing room now and then.

A boy in disguise will want you to have all your life revolve around him which is practically impossible.

6. He’s comfortable in his own skin.

A mature man is confident and secure in who he is.

He doesn’t need to put on a show or pretend to be someone he’s not.

He doesn’t claim to be who he is not.

He comes as he is and is not apologetic about it.

This doesn’t mean he’s arrogant or cocky, but it does mean that he knows his worth and he’s not afraid to show it.

He’s comfortable in his own skin and he doesn’t feel the need to constantly seek validation from you and others.

A mature man knows how to handle his money.

He is frugal and knows where he diverts his money.

He’s not blowing all his cash on frivolous things or racking up a ton of debt that he can’t afford to pay back.

He’s responsible with his money and he knows how to save for the future.

This doesn’t mean he’s stingy, but it does mean he’s not going to throw caution to the wind when it comes to his finances.

It simply means he does not have bad money habits that could be detrimental to you two along the line.

8. He has a positive outlook on life.

A mature man knows that life isn’t always easy, but he also knows that it’s important to focus on the positive.

He’s not a Debbie Downer or a Negative Nelly.

He looks at the glass half full instead of half empty.

This doesn’t mean he’s naïve, but it does mean that he chooses to focus on the good instead of dwelling on the bad.

His optimism will help with pulling through difficult situations and also lift your spirit when you’re down. 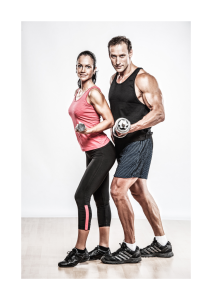 A mature man knows how to treat his partner right.

He’s thoughtful and considerate, always trying to do things that will make her happy.

He weighs in on the consequences of his decisions before he plunges into them.

He’s not selfish or self-centered—he’s generous and giving, always looking out for her best interests.

This doesn’t mean he’s a doormat, but it does mean that he’s not afraid to show his softer side.

A mature man is secure enough in himself to admit when he’s made a mistake.

He knows admitting his mistakes doesn’t make him less of a man but even exalts him before his woman.

He doesn’t have to play the blame game or make excuses.

He takes responsibility for his actions and he knows how to apologize when he’s done something wrong.

This doesn’t mean he’s perfect, but it does mean that he’s mature enough to admit when he’s messed up and learn from his mistakes. 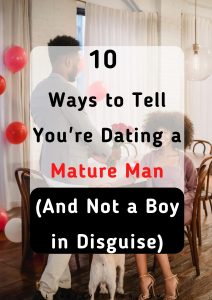 If you’re lucky enough to be dating a mature man, consider yourself fortunate.

You wouldn’t need to talk about everything and anything as he knows what to do and what not to do.